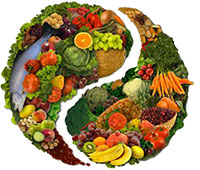 Assessing and normalizing GI function can have profound effects on overall health, leading to improvement in these and other conditions.

It is much easier to correct imbalances than reverse disease